V for Victory – The Story of Cadillac’s Performance Brand 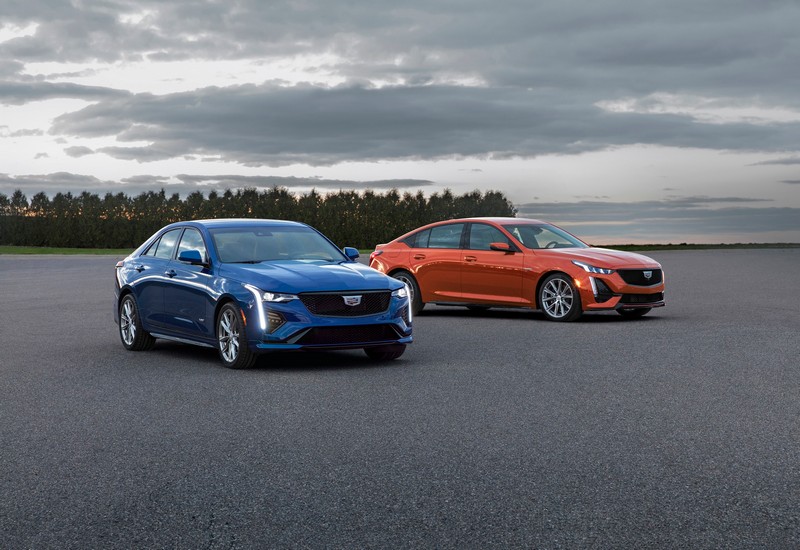 The unveiling of the first-ever CT4-V and CT5-V marks one and a half decades of the launch of the first V-Series vehicle. Here’s how Cadillac’s sub-brand has transformed American performance cars over the years.

In just over 15 short years of existence, the Cadillac V-Series has altered how the world views American performance cars. The brand shattered stereotypes and delivered unprecedented dynamics, luxury and incredible value for money, going head to head with firmly established European rivals. It was a bold move, but one that paid off.

The first V-Series vehicle, the Cadillac CTS-V sedan, was launched in 2004. Powered by the GM LS engine V8, with a six-speed Tremec manual transmission from the C5-generation Corvette Z06, the CTS-V delivered the practicality of a refined, family sedan and yet offered blistering performance.

However, it was not merely a case of strapping on a sports car V8 to a sedan and hoping for the best – the depth of engineering in the CTS-V made it one of the most agile performance cars on the market and garnered critical acclaim. Cadillac knew it was onto something big.

The second car to join Cadillac’s rarefied lineup was the stunning and luxurious XLR-V hard-top convertible. Its forward-looking angular design was head-turning; it sat low and wide, giving it a dynamic road presence. The exceptional styling was matched by equally evocative performance. Under the hood of the XLR-V was a supercharged Northstar Series engine developing 443 horsepower and a substantial 561 Nm of torque, making it one of the most powerful American cars in its class at the time.

Just two years since its founding, a third V-Series vehicle was introduced. This time it was the larger STS-V sedan. The STS-V was propelled by the XLR-V’s supercharged 4.4L V8, but with a bump of 26 horsepower and an additional 34 Nm of torque. It was also the first V-Series car to offer a driver-adjustable gearbox and bigger Brembo performance brakes for greater stopping power. However, despite its dynamic credentials, the STS-V did not compromise on hallmark Cadillac qualities of refinement and comfort. The STS-V offered the best of both.

By 2009 it was apparent that Cadillac’s V-Series had become a firm favorite with the enthusiasts and the second generation was launched with an all-new CTS-V. Unsurprisingly, the 2009 CTS-V took the market by storm. Featuring an evolution of Cadillac’s ‘Art and Science’ design language, the second-gen CTS-V was a striking reimagining of its predecessor. It was arguably the most influential V car with its ground-breaking performance and superb design.

Equipped with 6.2L V8 developing 556 horsepower and a prodigious 747 Nm of torque, the CTS-V took on and beat its European rivals on their home turf. The CTS-V blitzed the legendary Nurburgring in 7:59.32, making it the fastest four-door sedan to go around the 20-plus kilometer track in Germany at the time. It was an extraordinary feat - Cadillac V-Series had the world’s attention. Predictably, and given the success of the giant-killing new CTS-V, Cadillac subsequently introduced two other body styles on popular demand, namely a wagon and a coupe version, which proved equally popular.

The current, third generation of V-Series saw the launch of the all-new ATS-V, a compact premium performance sedan that despite a smaller V6 engine outgunned its main European competitors – and by quite a margin - with 464 horsepower. With its nimble handling and outright straight-line pace, the ATS-V received rave reviews around the world. The flagship of the range, however, continues to be the CTS-V, which, in its latest iteration churns out 640 horsepower and a gargantuan 850Nm of torque.

Recognizing customer demand for greater choice, Cadillac then launched its VSport sub-brand, which was available on the top-trim XTS sedan making 410 horsepower. Later, the CTS was also available in VSport guise, albeit with power bumped up to 420.

Cadillac has recently expanded its V-Series lineup further, but with a new performance philosophy of downsizing. Using its latest turbocharging technology to deliver exciting performance, while cutting down on weight and fuel consumption, Cadillac revealed the 2019 CT6-V earlier this year. And now, the latest additions to range, the CT4-V and CT5-V, are poised to shake up the segment.

Built on Cadillac’s award-winning rear-wheel-drive Alpha architecture, the new V-Series models are designed to deliver the ultimate blend of performance, presence and road-going refinement. Available in RWD or AWD, both share the latest standard V-Series performance technologies, including Magnetic Ride Control 4.0, which is tuned specifically for V models to enhance comfort without sacrificing performance-oriented responsiveness.

The CT5-V packs a 3.0L Twin Turbo V6 engine delivering 355 horsepower, while the CT4-V is propelled by a 2.7L Turbo engine making a Cadillac-estimated 320 horsepower, with a near perfect 50/50 weight distribution for exceptional balance and control. Crucially, they represent the renewed identity of V-Series vehicles, ones that do not compromise on efficiency for performance, or comfort for handling.

From the XLR-V that shook up the segment with its remarkable looks and performance to the record-breaking CTS-V, Cadillac’s V-Series cars have firmly established themselves in the upper echelons of American performance. And going by the lean and mean new duo of CT4-V and CT5-V, it’s safe to say that the story has just begun.