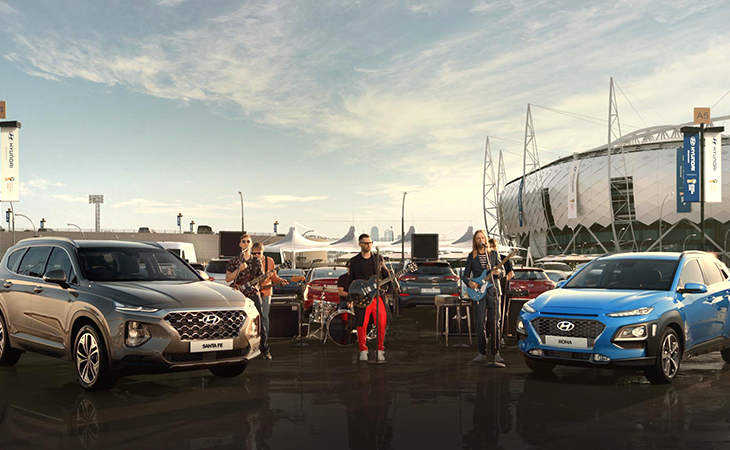 With its laid back, positive vibes, Three Little Birds is the perfect song to encourage football fans to forget their worries and focus on the tournament as a whole; embracing it as a celebration of sport, rather than experiencing the highs and lows of each match. Hyundai and Maroon 5 wanted to keep as close to the original song as possible as a mark of respect for Bob Marley and to capture its original spirit of peace and freedom.

Shot on location in LA, the accompanying music video is the creative brainchild of critically acclaimed Korean-American film and music video director, Joseph Kahn who has worked with artists including: Lady Gaga, Dr Dre, Snoop Dogg, Mariah Carey, Destiny’s Child, Christina Aguilera, U2, George Michael and Kylie Minogue, to name a few. In 2003 he won a Grammy and MTV VMA for Eminem’s ‘Without You’. He also recently won a second Grammy for Best Music Video of 2015 for Taylor Swift’s ‘Bad Blood’ ft. Kendrick Lamar.

Joseph Kahn was also responsible for creating the new Hyundai television advert that will be broadcast during the 2018 FIFA WORLD CUP RUSSIA ™. Featuring Maroon 5 and shot against a football stadium backdrop, it shows the band performing their version of Three Little Birds while preventing some disasters from taking place.

The video is shot in a reggae designed world created to showcase the soul of a Maroon 5 performance. The silhouettes of the band are formed from natural materials including wood, stone, feathers and jewels, intercut with male and female reggae dancers bringing energy to the music. The dancer’s bodies are then transformed into hundreds of miniature models of Hyundai’s new fuel cell electric vehicle, NEXO, driving in time to the beat, before being defined by beams of headlights illuminating their figures against a darkened background.

Maroon 5 said, “Bob Marley is one of the greatest artists in the history of music, he is truly a genius, so we were excited to be given the opportunity to cover ‘Three Little Birds” for Hyundai’s new campaign.”

Aside from music, football played a major role throughout the life of Bob Marley. He grew up playing the sport in fields and streets as well as in the recording studios. He supported Brazilian club Santos and idolised World Cup legend, Pelé. He famously said: ‘Football is a whole skill to itself. A whole world. A whole universe to itself. Me love it because you have to be skilful to play it! Freedom! Football is freedom.”

Head of Marketing Division, Hyundai Motor Company, Minsoo Kim said: “Hyundai has a long-standing history in football as a proud sponsor of FIFA since 1999. The partnership with Maroon 5 has allowed us to deliver a more innovative brand experience to our customers. For the 2018 FIFA World Cup Russia ™ Maroon 5’s modern take on Three Little Birds tells people to forget their worries; reflecting Hyundai’s new brand campaign, ‘Hyundai exists to enhance everyday lives with quality time’, which informs customers about using our smart technology to keep safe and worry free while on the roads.”

This year, as well as working with Maroon 5 to release Three Little Birds, Hyundai Motor has also created the ‘FIFA World Football Museum’ exploring the history of football and fan culture for fans. There are also a number of exciting competitions throughout the tournament that fans can enter to win amazing prizes, including: Hyundai Cheering Stadium, Be There With Hyundai, Hyundai Predictor’ and ‘Hyundai Goal of the Tournament. For more information on each competition and how to enter, visit worldcup.hyundai.com.